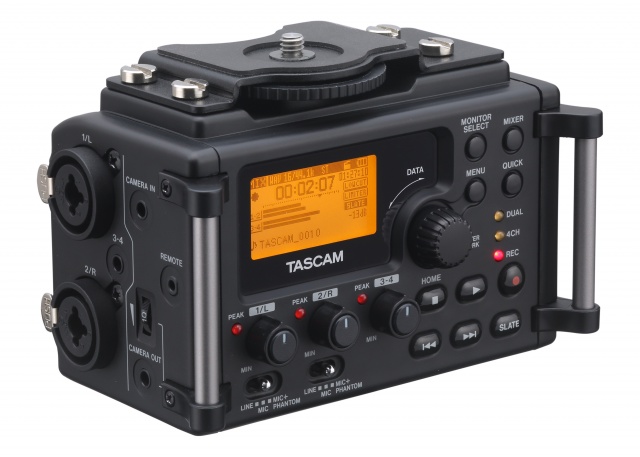 “This is the only unit in the UK.”

That was the parting shot of Tascam rep Russ-the-dude as he handed me the prototype DR-60D on Friday.

This, then, won’t be an in-depth stress test. I dare not even take it out of the studio. That and the video review will have to wait until it ships in mid to late May. For now, allow Scan Pro Video to be your eyes and ears and offer you a pre-order peep at the unit that was just voted best in show at NAB.

You spoke, they listened. Deploying 30 years of experience, Tascam have re-engineered their popular (and still a musos favourite) DR series into a purpose-built DSLR 4-track, solid-state, linear PCM recorder. The user-led push to hybridise DSLR into the film and pro video world has always required a workaround to capture broadcast quality audio, usually employing bulky (and expensive) field recorders or less than perfect solutions. For anyone new to DSLR video, the pro’s and con’s of shooting this way have been rebalanced more recently with the introduction of new cameras, firmware updates and third-party solutions for grip, lighting – and now – sound capture. Enough time has passed since the introduction of the 5D to allow for natural selection to show manufacturers what feature sets users need and have found to be the best fit. Now, the next generation of evolved solutions has arrived, created with the help of pro-user feedback, and are about to hit the market. All hail the DR-60D!

With Tascam’s legendary AD converters, high grade HDDA (High Definition Discrete Architecture) pre-amps, rugged, compact lightweight (510g excl. batteries) form factor, the DR-60D is just the thing we have been waiting for. You can see the full spec here, but beyond the obvious and already stated, the things of interest to you, the pro DSLR shooter, and what make this a stand-out piece of kit, are slate tone, monitoring and ‘camera out’ (the ability to record a high quality reference track back to the camera to aid sync in post). Surely already enough reasons to want this in your digital production tool kit. Hit the pre order button now! Want more?

Because of the tripod mount under the unit and screw wheel above, Run ‘n’ Gunners can attach to any camera or into any rig and record up to 96kHz/24-bit high quality audio straight to SD/SDHC media. Forgive me for mixing imperial and metric, but filmmakers have two 1/4″ – XLR Locking Combo MIC/LINE Inputs, 3.5mm Stereo MIC Input, Camera In, Camera Out, Line Out and Headphone Out. Both 1/4″-XLR Combo Inputs supply +48V Phantom Power and the 3.5mm Input supplies Plug-In Power for microphones requiring a bias voltage. Larger productions can utilise the shoulder strap mounting for dedicated sound recordist operation, or simply use the unit stand alone on a tripod or in a soundkit bag.

Good news – You don’t need a Masters in Sound Engineering to operate it. I often hear that audio is a blind spot for some videographers; a fear of the unknown (too many bit depths, impedance ratings and frequencies to understand). Let me assure you, The DR-60D is incredibly easy to use. I gave this unit, switched off, with unplugged XLR mic and headphones to a non-tech industry colleague and asked her to make a recording without use of the manual (the prototype came without one!). Result? Bingo. She genuinely, within 2 minutes, had a slated audio track ready for sync to the video in post. EASY. The process might appear slightly more complicated than you are used to with on-board audio on your camcorder, and if you are coming from a photographic background then all this ‘Sound Stuff’ is new anyway so the learning curve is going to be greater, but there is really nothing to fear. With Tascam’s popular user interface and protected external controls, operation is well thought out and very intuitive. Soft touch controls and dials are meant to eliminate handling noise during recording (remember 30 years of experience?). With multiple record modes (safety track, 4 channel record, auto rec), playback EQ and compression, versatility in the field will make this the bench mark others will try to beat. For now, this is the answer to most of our DSLR audio nightmares. Last but by no means least, It looks right too. People around the office cooed at it even without knowing what it does. Nobody wants a turkey sat next to their expensive, perfectly machined L glass and magnesium alloy body do they? It’s unfortunate that you need ugly wires sticking out of it to work. Can’t have it all… 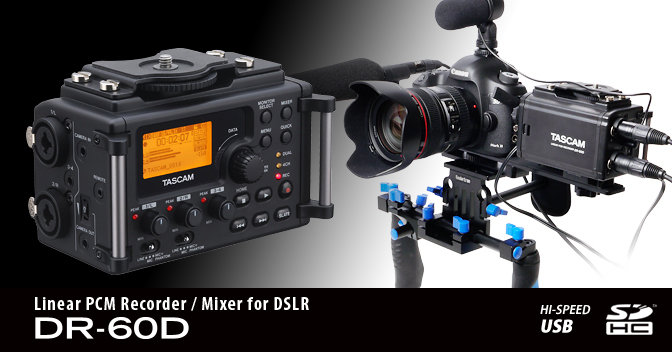 DSLR video has been a tightrope of compromise from the beginning. That tension has produced some incredible solutions (home-grown and high end) resulting in a continued shift towards DV film-making democracy and the production of beautifully shot movies on smaller budgets. Invention is driven by need, and boy did we need this! Why do we put ourselves through all this palaver? Ah yes; large sensor bokeh for a fractional price tag. But any shooter worth their salt knows that good audio contributes more than 50% to your overall production value. We have learned to live with DSLR con’s, but now Tascam have made our shooting lives just that little bit more pleasant, and for that we say Doumo arigatou gozaimasu.