That’s right. Ultra HD is coming to a TV near you, and sooner than you think. Coming? In reality it’s already here. Sony are confidently pushing this tech as the next format for entertainment delivery, and many US TV dramas are future proofing their current schedule by shooting in 4K and beyond using the likes of the Sony F65, Canon EOS C500 and RED Epic digital cameras. The BBC’s Natural History Unit are set to follow suit, Auntie having already road tested Super Hi-Vision (8K) at the London Olympics. Let’s do a quick recap of the current state of play. The latest NLE software is pretty much resolution agnostic. Blackmagicdesign and Canon have created ‘affordable’ 4K cinema cameras in the indies price bracket. With the advent of 64 bit O.S., CUDA GPU, ‘multithreading’ CPU, super fast SSDs and RAM multiplying into the hundreds of GBs, systems no longer depend on external hardware acceleration to boost video performance. 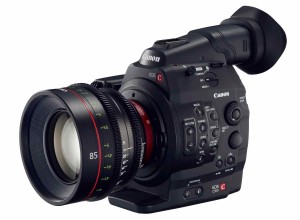 The final piece of the 4K workflow puzzle is a consumer 4K TV that doesn’t cost more than the average car. The momentum has been steadily building throughout 2013. Sony, Samsung, LG and Panasonic all have 4K TVs in the market place, but the first post NAB bombshell landed with the announcement of the 50″ TV from Seiki. At under $ 1500, this for me was the first real sign that true 4K (including Ultra HD/Quad HD variations) was, despite the nay says returning from Vegas, here to stay. The missing keystone.

Scan 3xS Systems have a range of PRO NLE workstations quietly sitting in the country’s top post house suites, one of which features on tonight’s Gadget Show – Channel 5 at 8 pm. You can watch the trailer here or watch again On Demand from the Gadget Show website. The Canon EOS C500 was used to provide the 4K footage. What was needed next was a workstation running Adobe Premiere Pro that wouldn’t choke when RAW 4K footage was ingested and cut to output to the 84″ Sony and LG 4K TVs on test. GPU power was provided by the DCC industry standard NVIDIA Quadro K5000. To transfer content from the EOS, the workstation connected to the AJA KiPro Quad via Thunderbolt, whilst multiple SSDs provided the data throughput required. 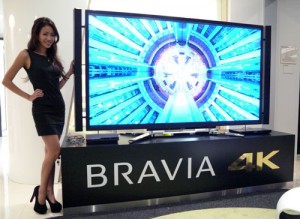 The comparative test to see if the 4K TVs are noticeably better than the current generation of HD TVs will prove interesting. The high pixel count will favour the oversized TVs (80″+), where resolution beyond Full HD becomes noticeable. Let’s wait and see what the verdict is.