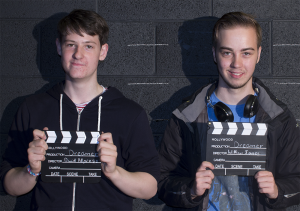 Student duo William and Daniel, Velocity 2014 Film & Video 2nd Runners-up, are on track to turn their life-long interest in all things filmmaking and VFX into promising careers.

“At fourteen I was using my Dad’s computer to make VFX infused shorts. My ambition is simple; to tell the best story with the best visuals.” – William Jones.

William is a self-confessed film geek. Since the age of five he’s been fascinated by special effects movies and quotes the legendary Ray Harryhausen as his first influence. His early love of special effects evolved into a burning ambition to work in the film post-production industry. Since the age of fourteen, VFX and filmmaking have been an all consuming passion. He’s been wise enough to surround himself with industry pros, absorbing advice, developing his knowledge and skills to the point where he’s already received commissioned photographic and animation work. Following the completion of ‘A’ Level studies, the next step for William is a stint at the world famous VFX academy Escape Studios.

“My passion for filmmaking is almost a cliché,” says Daniel. “Influenced by directors such as Quentin Tarantino and Edgar Wright, I started by watching indie filmmakers; how the films were made, shadowing each department and slowly taking part in the process. That’s how I’ve learned to write and direct narratives of my own. I’d like to eventually inspire the next generation of filmmakers.”

I had the pleasure of talking with them during a brief break from studies at their sixth-form college and asked them ‘How did you feel when you heard the news?’

D. I had to read the email a couple of times for my own peace of mind because I thought I was dreaming. So ecstatic is the best word I can use too.

W. It was gratifying that all the work and stress paid off.

Yes it was quite a rocky road for you wasn’t it?

W. Er, Yeah! I’d been editing this for about four weeks and about a week before the up-load deadline the PSU on my laptop died. So I have all my files backed up on the laptop but I can’t get at them! So all I could upload was a single scene from a five and a half min section that I’d previously sent to Daniel so he could work on the sound. That’s all we actually had left. It was still parked in our Drop Box so that’s all we had less than a quarter of our film.

You put this across very well in your InSide Story (link). The fact that you’d had such a shocker with the tech never phased you and you just carried on, which paid off in the end didn’t it?

W. It certainly did J

Who was the first person you told?

D. I got the email, so the first person I told was William. Then our parents, but you’ve kept us under NDA so we haven’t really been able to tell anyone. Now it’s out there we’ll be shouting about it don’t worry.

What have you both learned from this experience?

D. Always have a back up! We had all the footage on an external drive but didn’t have a computer to get access to it, or at least one powerful enough to work with the raw files from the Blackmagic. We’re using Resolve and Premier Pro so there’s no way my Dad’s old PC could handle it.

How are you going to use the opportunities that Velocity is offering?

D. Yeah, this is nowhere near the end for us (hopefully) so just keep cracking on with new ideas and new equipment and try and get more films like ‘Dreamer’ out there.

What’s next for you?

D. I guess we will rewrite this film into a longer version…

W. or first finish the one we had…

D.  yeah, and finish ‘A’ levels and then cart off to Uni to study Film Production.

W. I’m going to Escape Studios at Shepherd’s Bush which is a college dedicated to VFX. It’s a hobby I’ve had for years and I’m hoping to work in the visual FX industry.

D. There are kids in my class who have no idea what they want to do. We’ve known for years. 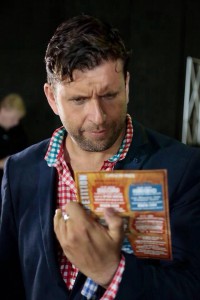 “I enjoyed feeding back to the talented winners, giving them pointers about what they might have done differently. We’re all always learning.”

I asked Daniel and William what advice would they give to someone considering entering Velocity next year?

D. Don’t hang around thinking about your ideas. Work on it, make it into a script and then film it.

W. You can never plan too much. In this sense Indie filmmaking is no different to a feature; you need to plan the logistics carefully so you know who, where, when and what needs to be in place. Of course there are always going to be blips but if you plan well enough you can deal with that. We’ll definitely try again next year.

There’s no doubt that these two talented filmmakers will soon end up working in their chosen fields. They are active members of their local camera and film club, where they have access to kit and like-minded people to crew their projects. William and Daniel plan to donate some of their prize pot to the club to say thank you for the support and acknowledge that filmmaking – at every level – is a collaborative enterprise.

On behalf of Scan, Intel and the competition sponsors, congratulations to everyone who took the time and effort to submit an example of their work. For everyone else who managed to talk themselves out of entering the competition, our last piece of advice, paraphrasing every pro we spoke to – Philip Bloom, Den Lenny, Trish Meyer, Maxim Jago, Russell Dodgson, Larry Jordan, Edmond Terakopian and Simon Blackledge – is simple. Next time: “JUST DO IT!”