Shot on What… Who cares? Celluloid is still Interstellar I've seen the future… 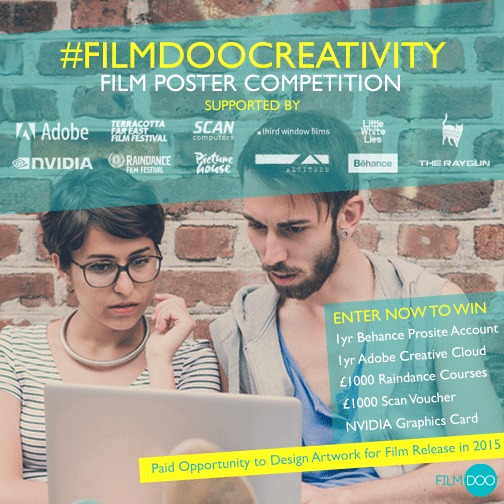 Scan Computers is proud to support FilmDoo (www.filmdoo.com) as they kick off their Film Poster Creativity Competition, where three winners will be given the paid opportunity to create artwork for an upcoming film release this year and many more fantastic prizes! Other supporters include major technology and design brands like NVIDIA, Little White Lies and Raindance!

The #FilmDooCreativity Competition is also supported by leading Film Distributors Altitude Entertainment, Picturehouse Entertainment, Peccadillo Pictures, Third Window Films, and Terracotta Distribution, as well as cutting edge film magazine Little White Lies. This is an opportunity for designers and film lovers from around the world to embrace their talent by creating an original, innovative and exciting film poster!

The competition is open from 28th January to 30th April 2015 and entrants can submit their film-inspired piece of artwork or film poster via the FilmDoo website and Adobe’s Behance platform.  The winners will be announced during Cannes Film Festival in May 2015, where their posters will be printed and promoted.

Winning designs will be chosen by a leading panel of judges from within the design and film industry. The Top Three winning entries receive the following amazing prizes from our partners:

Weerada Sucharitkul, FilmDoo co-founder notes: “Although FilmDoo is a film discovery website, we still feel that going to the cinema is a filmic experience second to none. Part of that experience is checking out the movie posters in the cinema lobby, or even collecting them, so we are thrilled to be paying homage to the art of movie posters with such prestigious partners, allowing you, the film-viewer, to have your own work up there for others to see. So if you have an eye for film, show us what you’re made of!”