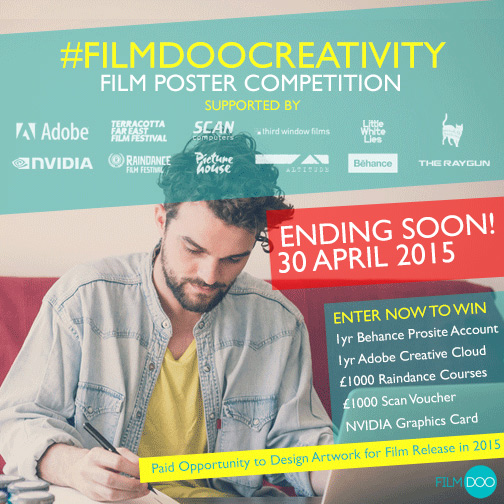 Scan Computers is supporting FilmDoo (www.filmdoo.com) in their Film Poster Creativity Competition, which kicked off end of in January. The competition will close on 30th April, so make sure to submit your original poster and be in to win amazing prizes. The Top 3 winners will also get a paid opportunity to design artwork for an actual film release. Others supporters include tech, film and design brands such as Adobe, Scan, Nvidia, Little White Lies, Altitude Entertainment, Picturehouse Entertainment, Peccadillo Pictures, Third Window Films, Terracotta Distribution, The Raygun, Shooting People, and Raindance.

The #FilmDoo Creativity Competition is a great success with hundreds of entries so far sent by talented designers from all over the world. Now is your last chance to get involved, so grab pen, pencil, brush, computer, mouse and your creative mind!

Early in May, the leading panel of judges from within the design and film industry will choose the Top three winning entries and the results will be announced during Cannes Film Festival.

Here is a reminder of the amazing prizes from the supporters:

Weerada Sucharitkul, FilmDoo co-founder says: “The FilmDoo team is thrilled and proud of the competition. Receiving hundreds of original film artworks and witnessing the passion for Cinema from all over the world really is what FilmDoo is about. The panel of judges will have a tough decision to make to select the winners. We would like to thank our supporters who helped us set up and promote the FilmDoo Creativity Competition. We are looking forward to announcing the results at Cannes Film Festival!”